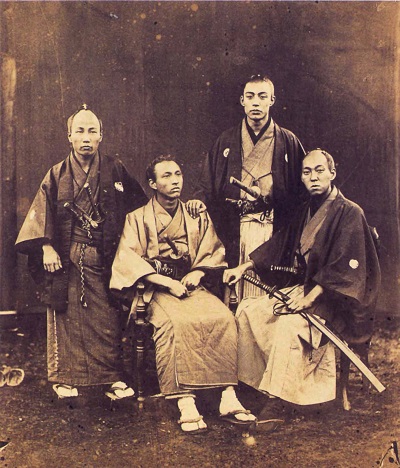 The Dawn of Japanese Photography

This exhibition will present photographs dating from 1853 to 1900 belonging to institutions with exhibition facilities in Shikoku, Kyushu and Okinawa, offering the chance to see some of the earliest photographs produced in this country.
In preparation for this exhibition questionnaires were sent to 2,184 institutions, including art galleries, museums, libraries and educational authorities in Shikoku, Kyushu and Okinawa.  Of these, we received 696 responses and were able to discover 71 institutions that held original or duplicate photographs.These were then researched on site and the best gathered together here for this exhibition.
It is only because they have been carefully preserved  over the years in their hometowns that these early pictures could be brought together to make up this exhibition today, in the twenty-first century. The size and the designs on the back of these photographs possess a fascinating originality, reflecting the fact that they have come down to us through a long history.  We hope that in addition to their visual attraction, you will also enjoy the variety that exists in the photographic media.

Section1：Encounter
The invention of photography was first announced to the world in France on August 19, 1839.  This invention became known as the daguerreotype process, in which the image was captured on a plate of polished silver.
So, how did Japan come into contact with this Western invention?  In 1843 UENO Toshinojo, a merchant and the official clockmaker in Nagasaki, tried to import a complete set of the equipment necessary to produce daguerreotypes, but unfortunately he was not successful and according to contemporary records, it was not until five years later, in 1848, that it finally arrived.  However, photographs dating from this time have yet to be discovered and it would appear that although he managed to obtain the equipment, the actual photography was not so easy.
The first photograph to be taken of a Japanese on Japanese soil was produced by the photographer who accompanied Commodore Perry on the American East India Squadron.  Matthew C. Perry first visited Japan in 1853 then returned the following year, 1854, with a larger fleet to demand the opening of the country to foreign shipping.  An American photographer named Eliphalet Brown, Jr. accompanied this mission and his daguerreotypes were used as the base for a series of lithographs that accompanied the ‘Narrative of the Expedition of an American Squadron to the China Seas and Japan'. His work also included images of the Ryukyu Kingdom, as Okinawa was then known.
The oldest extant photograph to have been taken by a Japanese is a portrait of the Daimyo of the Satsuma Domain,‘Shimazu Nariakira’, that was taken by USHUKU Hikoemon and others.  This photograph was produced using daguerreotype equipment, but it has been ascertained that members of the Satsuma domain had also been studying calotype, albumen prints and other photographic techniques extensively, even prior to Perry’s arrival in Japan.
Immediately following the opening of the country, a Japanese mission set off for the U.S.A. on the USS Powhatan, accompanied by the Kanrinmaru, a Japanese ship crewed largely by Japanese.  Upon their arrival in the U.S.A. samurai from the mission and the engineers from the Kanrinmaru visited photographic studios in San Francisco and New York to have their pictures taken.
In the West, the concept of photography had fascinated people for many years before the invention of practical methods of achieving it, whereas in Japan, the people came into contact with finished technique before they had even considered it for themselves.  Japanese photographic history started from the day that the first Japanese posed in front of the lens.

Section2：Mastery
Following the ratification of the Japan-U.S.A. Treaty of Peace and Amity, Japan signed treaties establishing diplomatic relations with many other Western nations.  With the opening of the Port of Yokohama on July 1, 1859, foreign commerce was no longer limited to Nagasaki and foreign settlements sprang up in Kobe, Hakodate, etc., areas of land were made accessible to foreigners and a gateway to the rest of the world was officially opened.  Numerous photographers took advantage of this to visit Japan and the early Japanese photographers studied their art from them.
The first Japanese photographer to establish his own studio was UKAI Gyokusen.  He learned the necessary skills from a British photographer and it has been ascertained that he had opened a studio in the Yagenbori area of Edo by at least August, 1861.  SHIMOOKA Renjo also studied photography under a foreigner in Yokohama, and like UKAI Gyokusen it is thought that he initially catered for Japanese customers, selling his work through a bookshop, but later he shifted his target to foreign tourists visiting Japan.
Unlike Edo or Yokohama, Nagasaki had a long history as the only port open to international trade and was traditionally a commercial city. UENO Hikoma was born in Nagasaki so he had been able to gather a great deal of information on the subject of photography and the instruction he received from foreign photographers after the opening of the port can be said to have been merely the final stage of his education.  With the support of the Tsu domain, he succeeded in acquiring a set of photographic equipment and his experiences are recorded in his ‘Seimikyoku hikkei’ (Chemistry Laboratory Handbook). Later, he opened a studio in Nagasaki and was visited by many people not only from Kyushu, but also all over Shikoku and the Kinki area, who were sent by their domains to study photography, creating a unique network of photographers.  Another photographer from Nagasaki, UCHIDA Kuichi had mastered photographic techniques before being introduced to UENO, but in order to avoid direct competition, he traveled to Kobe and Osaka before setting up a studio in the Asakusa area of Edo.  In addition to official work, producing a portrait of the Emperor and accompanying the Emperor on a tour around the provinces, he also photographed actors and famous places, distributing these and contributing greatly to the spread of photography.
Photography was mastered by the first generation of photographers in the mid-nineteenth century as both an exercise in the latest pure science and also as a commercial enterprise.  Their success inspired the next generation of photographers and served as the driving force to spread of the art.

Section3：Diffusion
In Japanese photographic history, it can be said that the bulk of demand during the mid-nineteenth century was for portraits. After the Meiji Restoration (1868) photography became generally accepted throughout society as‘an easy way of creating individual portraits'. In response to public and private demand, the field later expanded to include the production of records of public works projects and replaced the role of woodblock prints in providing visual images of kabuki actors or famous places.
After the pioneers there came the second-generation photographers, people like INOUE Shunzo, who learned his art during the feudal period and began producing works at the photographic studio belonging to Lord Yamauchi, Daimyo of Tosa Domain in 1869, before going on to become independent. There were also official institutions, such as the Tokyo Printing Bureau (now the National Printing Bureau) that was established in 1878 and contained a studio where large numbers of people had their portraits taken, including many members of the general public.
Unlike the first generation photographers who learned their art through contact with foreigners, the second generation had Japanese teachers and studied from literature written in Japanese. In Nagasaki in addition to students such as SETSU Shinjiro, TAKESHITA Keiji, KIYOKAWA Takeyasu, etc., UENO Hikoma’s sons, Yoichiro and Hidejiro also established themselves as photographers. These photographers in turn, passed their knowledge on to the next generation. In this way, many apprentices appeared, eager to learn photography, and as they also established themselves as photographers, numbers swelled, making the field increasingly competitive.
From the early to mid Meiji period (late 19th century), Japanese photography expanded its target from the personal to public issues. It was not a period when everybody was able to take their own photographs, but neither was photography used to create artistic expressions.  However, it was during this period that people achieved a general understanding of what photography meant.